Our Senior Pastor, Dr. David Grantham joined the Pinecrest Church family on April 12, 2015. Bro. David is a native of Perry, GA. He holds a B.B.A. from Georgia Southern University, an M.Div. from Southeastern Baptist Theological Seminary and a D.Min. from Southeastern Baptist Theological Seminary. He was licensed to the ministry in 1994 and ordained as a minister in 1995. Prior to coming to Pinecrest, David served as the Associate Pastor at Centerville First Baptist Church in Centerville, GA from 2002-2015. While at Centerville he wore a myriad of hats, including Family Pastor, Mission Pastor, Recreational Pastor, Student Pastor & Interim Administrator. Bro. David also previously served as the Student Pastor of FBC, Cordele, GA as well as on staff at churches in North Carolina and South Carolina.

Bro. David has a passion for missions. He has led numerous mission trips all over the world, most frequently to Africa and to Brazil and Peru, where he also teaches in a seminary which trains local pastors.

David and his wife Christy have been married since 1988 and they have three children. Christy holds an Education degree from Georgia Southwestern State University and is a 3rd grade teacher at the Westfield Schools.

Our Associate Pastor & Minister of Music, Rev. Kenny Peters joined the Pinecrest Church family on March 8, 2009.   Kenny is a native of Crawford County, Georgia with deep family ties to Middle Georgia. He holds a B.A. in Voice and a B.M. in Music Education from Brewton-Parker College, as well as an M.A. in Biblical Counseling and an M.Div. from Luther Rice University and Seminary. He earned his Th.M. in Theology & Church History from the Liberty University School of Divinity, graduating with "highest distinction."
Kenny is a member of the Evangelical Theological Society (ETS) and The American Society of Church History.  He also teaches classes for some of the Georgia Baptist Convention's Regional Bible Institutes in Cordele and Warner Robins.
Kenny serves as the president of the National Alumni Board of Brewton-Parker College and was named the 2016 BPC Ministerial Alumni of the Year. In his free time Kenny enjoys reading Star Wars books, working on family genealogy (which includes exploring cemeteries) and writing devotions. Check out his blog here: The Musicologian
Kenny & his wife, Misty have been married since 1996 and they have two children - Alannah and Walker. Misty grew up in Metter, GA and holds an ASN/R.N. Degree from Darton State College, and graduated Magna Cum Laude with her BSN from the Liberty University School of Nursing.  She is a Circulation Nurse in the OR & PACU at Crisp Regional Hospital. 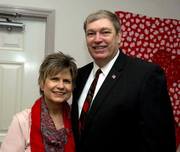 Mrs. Leslie Cole, our Director of Children's Ministries officially joined the Pinecrest staff in January 2019, but she is no stranger to our congregation. Leslie and her husband, Don have served at Pinecrest before in several capacities, including a time when Don was our Interim Senior Pastor. Leslie brings years of ministry experience and love for children and families to our fellowship. She is a graduate of Scarritt College (majoring in Christian Education) and Georgia Southern University (where she studied Recreation). Leslie and Don have served in ministry in Middle & Southwest Georgia in addition to having led a congregation in Panama.